Ronin Alpha - The First Drifter is the Boss of Mirai Mirror.

Ronin appears as a classic Roblox noob with a large katana in the same color scheme. He appears out of a blue pixelated portal that fades as he runs on the water to the stage while Goliath Omega rises from the water on the opposite side.

On the night version of the map, Midnight Mirror, Ronin Alpha is given Guest-like colors.

On White Waters, the 3rd variation of the map, Ronin Alpha's torso is a random color, with blue pants and a sand colored skin tone.

Ronin slashes with his katana. Each sword hit deals 3/6/12/18 damage, regardless of the attack.

Ronin Alpha throws his katana, which then spins around Ronin Alpha, hitting twice.

Ronin will throw his katana forward while the katana spins, hitting twice.

Ronin will jump into the air and slam the katana 3 times toward the target.

Ronin will attempt to run around the host to get behind them before attacking with one of the attacks above.

Ronin will block attacks with the same manner as Artisan's Parry, preventing all damage and staggering melee attackers while active. By default, Ronin Alpha parries for 0.33 seconds, but this time is reset with each successful block, allowing Ronin to parry multiple attacks with a single charge. This ability has 3 charges and restores 1 charge every 2 seconds.

Ronin attacks more often if they hit a wall or corner. 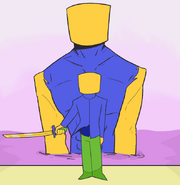