Joining the game for the first time (Freebie)

"Having the strongest desire to possess, yet possessing nothing of its own. The intruder from another world journeys on."

The Invader is one of the fifteen Hosts featured in HOURS.

The Invader is a melee oriented host. It is automatically obtained once you start the game. It mainly focuses on fast attacks in quick succession to destroy enemies. Its true name is Clock Strings.

The Invader appears as a green humanoid with 3 neon green horns sticking out of its head. It has two blades protruding from its hands resembling khopeshes, which are used as its weapons. Its icon is marked on its face, and also represents its horns and blades.

Invader is the burst attacker of hosts. It strikes fast for high accumulative damage and can use its abilities to recover health with its attacks.

Slash (M1 combo) is weak, but fast. On hit, the current cooldown on all other abilities is decreased by 1 second. The reach of this attack is very short, necessitating an 'in your face' tactic to consistently land hits.

Spin Slash (M2) deals less damage per hit than the basic slash, but is significantly faster, and can be used while moving. This attack is most effective when already in range of an enemy, however, especially if there is more than one.

Dash Slash (SHIFT) Travels a great distance, staggers on hit, and deals decent damage. When aimed up at the just the right distance, it makes for no delay in a follow-up attack, as Invader will end up next to the target.

Empower (Q) is a buff skill. It has no time limit; it ends only when Invader fails to land a direct attack for 3 seconds. (The cooldown of this ability is not applied until it ends.) Melee attacks at this time deal additional damage and restore lost health. For best results, use when all cooldowns are finished.

Execute is a quick stab that deals 25% of a hit enemy's missing HP as damage. If this attack destroys an enemy, its cooldown refreshes instantly. The threshold at which this can occur is when the enemy is at 20% HP or lower. Unless fighting a boss, this ability should be saved for that threshold in order to launch this attack in quick succession; for maximum effectiveness, lower the HP of as many enemies as possible below 20% before using.

Splatter spits a cluster bomb-like glob of acid. The attack deals moderate damage and any enemies that make contact with the acid receive a debuff that causes them to take more damage.

Hunt is a vertical variant of Spin Slash in which Invader leaps into the air and performs a spin attack while airborne for the same damage value. It won't be able to hit as many enemies as Spin Slash, but can be used in a combo with Spin Slash for very high damage, and the leap this skill provides can be used to dodge and counter attacks.

Envenom is a quick stab like execute, but instead deals 20% of an enemy's max HP as damage over time. Of course, this skill becomes more effective the higher an enemy's max HP is when struck by the attack, and as such this ability should be saved for use on enemies with more HP than average.

Empower (Q): Increase Invader's power by 50% for 3 seconds. Melee attacks have 25% lifesteal and refresh the duration of Empower. [20s CD]

Activate to strike dealing 25% of target's missing health as damage. Cooldown is reset if a finishing blow is dealt. [20s CD]

Activate to spit a glob of acid that explodes into smaller globs of acid, dealing 6 damage and inflicting Corroded, causing enemies to take an extra 2 damage from all sources. [15s CD]

Bloodlust: Melee attacks increase movement speed by 50% for 2 seconds. Reduce the duration of staggers, stuns, silences and disarms by 75%.

Cripple: Slash reduces speed of enemies hit by 40% and deals an additional 8 damage over 2 seconds.

Impale: The first Slash in a combo is changed to a dashing slash that deals 18 damage.

Slay: Casting an ability increases the damage of the next Slash by 150%.

Massacre: Spin Slash increases the damage of Slash by 15% for each enemy hit for 3 seconds.

Neurotoxin: Spin Slash reduces power of enemies by 40% and deals an additional 12 damage over 3 seconds.

Adapt: Dash Slash grants 25 armor for 3 seconds for each enemy hit and its cooldown is halved on the first hit.

Mutilate: Dash Slash deals 200% more damage at the end of the slash.

Evolve: Melee attacks increase the power bonus of Empower by 4%, up to 60%. Slash costs 1 health while empower is active.

Immolate: While Empower is active, take 1 damage and deal 6 damage in an area every second. Increase the duration of Empower by 1.5 seconds.

Menace: Empower increases damage dealt and taken by 50%. Slashes during Empower reduce the cooldown of Empower by 1 second.

Puncture: Empower causes Slash to deal an additional 2% of target's maximum health as damage but also reduces lifesteal by 50%.

Burst: Casting an ability deals 8 damage to nearby enemies.

Slaughter: Melee attacks give enemies 1 stack of Slaughter. Upon reaching 8 stacks of slaughter, remove all stacks and deal 16 damage as well as staggering. 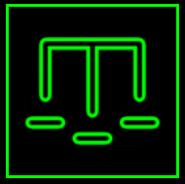 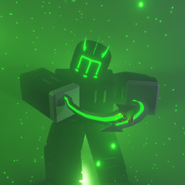 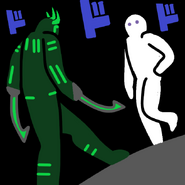 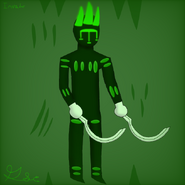