Tripping every single wire during the last part of the Bloxxerman battle then defeating them.

Bloxxerman - Builder of the Realm

Were you looking for Bloxxerman?

"You thought you were going to get a true name but it was I, Dio!"

Bloxxer boasting about his nails

The Bloxxer is one of the fifteen Hosts featured in HOURS.

Bloxxer is an exceptional tank host. He moves very slowly, but gets by on the battlefield with his powerful attacks. Obtainable by tripping every wire of Bloxxerman's 20 Meter Radius Nail Splash. This is easier to do by setting your graphics to 1, to lower the amount of wires. He has no true name.

The Bloxxer takes the same appearance as Bloxxerman, hence his name.

Bloxxer is the slowest host in the game, which hinders his ability to avoid attacks by conventional means. His best defense is his own offense, using his powerful projectiles to keep enemies at bay.

Impale (M2) is Bloxxer's only melee attack, but its range is quite long and has almost no delay, and stuns enemies on hit for a considerably long time. This can be used to initiate a combo attack with Super Nail Splash! or Nail Rain. For maximum effectiveness, this should be timed to cancel an enemy's attack.

Sink (SHIFT) teleports Bloxxer to a random location on the field. The lower his HP, the more additional effects this will provide; below 60% HP, it summons a clone of Bloxxer at a random location which attacks with a Nail Splash before disappearing (2 clones below 20%), and below 40% HP, Bloxxer gains a 20 HP Shield that reflects projectiles and grants immunity to most negative effects, and staggers a melee attacker that breaks the shield. Due to the unpredictable nature of this skill, it's best used only when necessary to keep distance. While Bloxxer is immune to crowd control effects while this skill is active, he will still take damage if he is hit while sinking into or emerging from the ground.

Super Nail Splash! (Q) is an empowered version of Nail Splash which lasts longer, has stronger knockback, and can be continually aimed. The angling of this attack has a very slow turning speed, so it should be timed for when an enemy is not moving too fast in order to stagger them and allow the full attack to connect.

Nail Rain (E) drops nails onto the nearest enemy's location when activated. The rain follows the target as they move. This attack has a small windup and lingering time, so it is not recommended to use this attack when enemies are too close.

With the exception of Impale, which stuns, and Nail Splash, which does not inflict any form of Crowd Control, all of Bloxxer's attacks stagger enemies, even on Seconds Difficulty. This in combination with Sink and the knockback of his projectiles prevents enemies from getting too close.

Nail Splash (M1): Fire a burst of nails dealing 1.125 damage per nail, with each nail being able to push enemies back slightly. [3s CD]

Impale (M2): Turns the blueprint in Bloxxer's hand into a large nail, then thrusts the nail forward. Stuns for 2 seconds with a base damage of 10 if it lands and 5%EnemyMaxHP damage. [8s CD]

(Passive) Pwning: When spawning into combat Bloxxer falls from the sky and creates a massive shockwave when he hits the ground, dealing up to 25 damage depending how close enemies are to Bloxxer when he drops. All of Bloxxer's attacks which Stagger will still do so on Seconds difficulty. (Note that Bloxxer will only perform this ground pound when spawning into Sunken Sands, appearing in Multiplayer mode, or selected by the Overclocked Page Tempo.

-A host with a high movement speed such as Equinox or Parting combined with a speed enhancing tempo like Rush or Zion is well suited to tripping every wire.

- Having your quality set to the lowest setting reduces the number of wires that are needed to be tripped towards unlocking Bloxxer. This is meant to improve performance for those who need it, but can be used to make this challenge easier.

- When used with his Aspect of God upgrade, Buffoon can trivialize the process of tripping the wires due to the projectile deflection this upgrade provides. 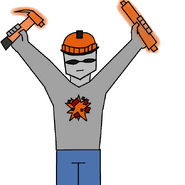