The Root, The Source, The Origin - Myth-A-Weave

"An existence born of itself, weaved from a string of ones and zeros. Nobody knows what thoughts lies within its head."

The Artisan is one of the fifteen Hosts featured in HOURS.

The Artisan is unlocked upon completing Mirai Mirror. It is armed with both a melee and ranged attack, but the overall damage it can do is low. To combat this, the Artisan can parry attacks and spawn allies to assist with damage, starting with only a stationary turret, but can get more unique allies with upgrades. Its true name is Myth-A-Weave.

The Artisan is a robot with grey and yellow coloration and wields a disk-like weapon (its "Weaver") for both attack and defense. It has what appears to be pistons on its torso and shoulders that pop out while Auto Repairs is active. Its icon displays two vertical rows of three dots in between two vertical parallel lines, resembling the Artisan's face.

Artisan is an unusual host which has very little offensive capability on its own, but can create minions and turrets to fight in its stead.

Slice (M1 Combo) is (by default) Artisan's only melee attack, dealing mid to low damage. Its wide sweeping range allows it to hit multiple enemies if Artisan is close enough.

Parry (M2) will typically see much more use than Slice, however. It activates a shield between Artisan and the target, staggering enemies whose melee attacks touch it and preventing all damage from standard projectiles. The shield is active for approximately 0.25 seconds and the skill itself lasts for 0.5 seconds, and can be immediately activated again. However, if an attack hits the shield, this time resets, meaning it will remain up for the entirety of a burst attack such as Bloxxerman's Nail Splash. Many of Artisan's passive upgrades revolve around effects applied upon a successful parry.

Turret (SHIFT) Creates a basic turret sentry, which deals rather low damage, but doubles as a distraction for enemies, who will target the turret instead of Artisan if it is closer to them. The same applies for all other sentries that can be obtained through upgrades. Effects that apply to Artisan when a tempo is activated may or may not affect Artisan's sentries the same way (e.g Zion will double the sentries' speed of time, but Halt will stop time for them as if they were enemies).

Barrage (Q) Is Artisan's primary source of direct damage. By default, it has 20 charges. When activated, Artisan fires 1 projectile per charge at the target at a decent rate for moderate overall damage. This ability regains 1 charge per 0.5 seconds and can be ended early, but cannot be activated unless at full charges.

Artisan also has a passive ability called Auto Repairs. This ability provides Artisan with health regeneration whenever it is below 35% HP. Many upgrades will provide additional boosts to this effect.

Turret (SHIFT): Build a stationary turret that fires at enemies for 12 damage per second for 20 seconds. [20 second cooldown. Has 40 health, degenerating 2 per second, and fires a bullet with spread at the nearest target every 0.25 seconds. Each bullet deals 3 damage. Despawns after 20 seconds. Deals a maximum of 216 damage across its duration. Takes ~1 second to build.]

Barrage (Q): Fire a stream of bullets, dealing 60 damage over 2.5 seconds. Must be fully charged to activate. [Start with 20 bullets; each charge fires one bullet. Recharge a bullet every 0.5 seconds. Channeling interrupts the cooldown and sets it to 0.5 seconds. Each bullet deals 3 damage and has spread.]

Auto Repairs (Passive): Regenerate 2 health per second when health is below 35%.

(Note that all sentries take 0.5 seconds to build.)

Taking fatal damage reduces your health to 1 instead and increases healing received by 200% for 5 seconds. This effect has a 30 second cooldown. Auto Repairs grants 35 armor passively.

Activate to increase the health regeneration of you by 5 and nearby allies by 10 for 5 seconds aswell as increase their lifetime by 5 seconds. Cooldown recharges 100% faster when auto repairs is active. 30 second cooldown.

Activate to spawn an Auto Fighter. 40 second cooldown. [It has 80 health with stagger immunity, and swings its sword at the nearest target when close, dealing 10 damage. Despawns after 20 seconds. Deals a maximum of 190 damage across its duration.]

Activate to spawn an Auto Ranger for 20 seconds. 40 second cooldown. [It has 60 health, and fires a gun every 2 seconds in bursts of 8 at the nearest target with 0.125 seconds between each shot. Each bullet deals 4 damage and has spread. It can attack while moving. Despawns after 20 seconds. Deals a maximum of 208 damage across its duration.]

Activate to spawn an Auto Warlock. 40 second cooldown. [It has 20 health, and attacks the nearest target with a ranged ball of energy after 1 second of charging, dealing 30 staggering damage in an area. After 1 second of end lag, it avoids enemies for 2 seconds. Despawns after 20 seconds. Deals a maximum of 150 damage across its duration.]

Activate to spawn a Sharpshooter Turret. 30 second cooldown. [It has 40 health, and fires a high velocity bullet at the nearest target every 3 seconds. Each bullet deals 40 damage. Despawns after 15 seconds. Deals a maximum of 140 damage across its duration.]

Activate to spawn a Spreadfire Turret. 30 second cooldown. [It has 80 health, and fires 6 bullets at the nearest target with high spread every second. Each bullet deals 3 damage. Deals a maximum of 18 damage with a shot. Lasts 15 seconds. Deals a maximum of 252 damage across its duration.]

Activate to strike, dealing 15 damage and silencing and disarming hit enemies for 2 seconds. Can be used while attacking. 6 second cooldown.

Dynamic Accumulator: Slice and successful Parries reduce the cooldowns of abilities by 1 second.

Reconstruction Matrix: Slice heals you by 2 and all nearby allies by 5 and increases their lifetime by 0.75 seconds.

Kinetic Absorption: Parry shields for 50% of the damage blocked for 4 seconds. Successful Parries increase the damage of the next Slice by 100% and causes it to stagger.

Kinetic Dispersal: Successful Parries deal an additional 12 damage in an area and activates Auto Repairs for 3 seconds. [Staggers. Auto Repairs heals a total of 4 health when activated and not refreshed.]

Kinetic Reversal: Parry reflects 150% of melee damage blocked and reflects projectiles. [The amount of damage reflected is equal to the damage values from Minutes (Difficulty).]

Auto Sentry Mk2: Turret gains a 40 health shield for 10 seconds and its firing rate is increased by 35%.

Auxilliary Loader: Turret's fire rate is increased and its lifetime is suspended while Barrage is being channeled. Accuracy of Turret and Barrage increased.

Proximity Link: Turret increases the health regeneration of nearby allies by 2 and gains 50 armor and 50% power when you are nearby.

Focus-Fire Module: Enemies hit by Barrage take 10% up to 100% increased damage from Barrage for 2 seconds.

Sure-Fire Module: Every 2nd hit of Barrage refunds a charge of Barrage.

Stimmer Drone: A healing drone orbits you and increases your health regeneration by 1. Auto Repairs increases speed and power by 35% when active.

Stinger Drone: A cannon drone orbits you and shoots the closest enemy for 6 damage every 2 seconds. Auto Repairs doubles its fire rate. Increase the activation threshold of Auto Repairs to 50 health.

Striker Drone: A guardian drone orbits you, dealing 10 damage and staggering on contact with enemies. 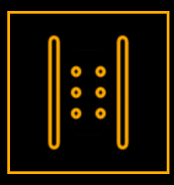 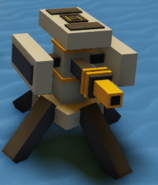 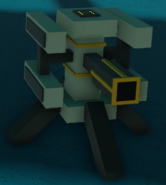 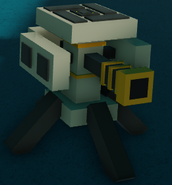 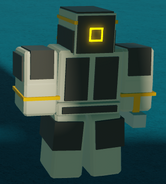 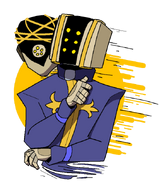 Priest Artisan with his own Stand (Made by Gears#6442) 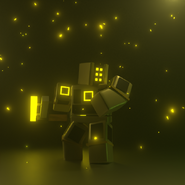